Muslims believe that Islam is a faith that has always existed and that it was gradually revealed to humanity by a number of prophets, but the final and complete revelation of the faith was made through the Prophet Muhammad in the 7th century CE. 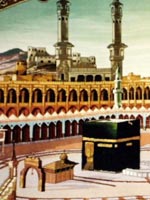 Muhammad was born in Mecca in Saudi Arabia ©

Muhammad was born in Mecca in Saudi Arabia in 570.

He was a deeply spiritual man, and often spent time in meditation on Mount Hira.

The traditional story of the Qur'an tells how one night in 610 he was meditating in a cave on the mountain when he was visited by the angel Jibreel who ordered him to recite.

Once Jibreel mentioned the name of Allah, Muhammad began to recite words which he came to believe were the words of God.

During the rest of his life Muhammad continued to receive these revelations. The words were remembered and recorded, and form the text of the Holy Qu'ran, the Muslim scripture.

Believing that God had chosen him as his messenger Muhammad began to preach what God had revealed to him.

The simple and clear-cut message of Islam, that there is no God but Allah, and that life should be lived in complete submission to the will of Allah, was attractive to many people, and they flocked to hear it.

Muhammad's popularity was seen as threatening by the people in power in Mecca, and Muhammad took his followers on a journey from Mecca to Medina in 622.

This journey is called the Hijrah (migration) and the event was seen as so important for Islam that 622 is the year in which the Islamic calendar begins.

The return to Mecca

Within ten years Muhammad had gained so many followers that he was able to return and conquer Mecca.

From this time on he was generally accepted by the faithful as the true final Prophet of God.

Muhammad continued to lead his community both spiritually and in earthly matters until his death in 632. 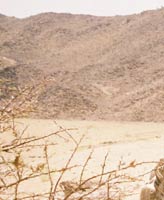 In the Footsteps of Muhammad, Edward Stourton traces the roots of Islam; the history of the prophet, and the impact this mystic and warrior has on international affairs today.

In the year 610 a 40 year old illiterate trader in the deserts of Arabia received a revelation that would change the world.

Islam is now the second most popular religion on the planet with more than a billion followers. 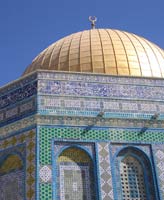 The Dome of the Rock, Jerusalem.

Jerusalem is the third holiest site in Islam: the first Muslims didn't pray towards Mecca, but to Jerusalem.

This episode explores the theory that Islam may have grown out of a cult of Judaism.

It also explores the meaning of jihad and how the life of the prophet and the battles against the pagan Meccans have been used to justify suicide bombings. 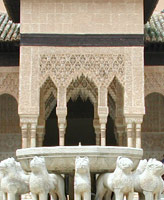 The Alhambra Palace is perhaps the finest surviving Muslim palace in the world and its symbolic of an episode that many Muslims believe has been all but written out of the history books by Europe's Christians: the flowering of Islam culture, philosophy and science, which meant that once the intellectual heart of Europe beat not in Paris, Rome or Athens, but in the great Muslim cities of Granada and Cordoba.

The music in this episode is from a group called Joglaresa. 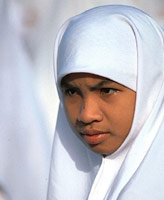 Indonesia is the world's largest Muslim nation and since it proclaimed its independence in 1945 it has often been plagued by religiously motivated violence.

But Islamic reformers in the country are advocating a radical reinterpretation of the life of Muhammad as a way of leading the country to democracy.

Could this be the start of an Islamic enlightenment that will lead the way for the rest of the Muslim world?