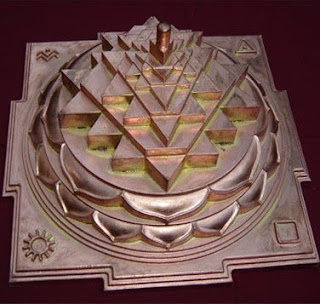 Khadga means a sword and mala means a garland. Sword cuts the head, separating body from the mind. It can be interpreted also as wisdom, which separates, categorizes, and classifies. So it is a symbol of knowledge. Khadgamala is about imagining a garland of synergistic ideas, nourishing and protecting them and putting life into them.

All of the sadhana of Srividya can be achieved by the recitation of the Khadgamala. Hours of long ritual compressed to less than half an hour of intense meditation that will give you a ticket on the same plane as the great Srividya Upasakas. Says one experienced Srividya Upasaka, "Whatever your developmental stage, this is IT!" Even those who have not been initiated into Srividya can benefit from the Khadgamala.Sri.Amritananda Natha Saraswati himself describes it as follows: "The Khadgamala is the equation I=WORLD=BEYOND. Regular practice protects you, nourishes you, and takes you beyond. It fulfils all wishes, more than you desire, instantly. Therein lies its power. How should you practice Khadgamala? As you are reciting each name, a portion of Sri Chakra should spring up in your imagination. The power comes from intensifying concentration to visualize the form, hear the sound, feel the touch, taste, and smell of the divine perfume of the goddess manifesting that part of the ever youthful Goddess.The Goddess loves fun. She is deeply in love with You, making You HER Siva.

So begin your journey to Goddess today, no matter how feebly. You can add power and depth as you move along.

Of this, Devi's sword, the Seer is the Sun rising from the ocean; the ocean being the Divine Mother; Gayatri is the meter; passionate Kameshwari, sitting on the lap of joyous Kameswara is the deity; Aim is the seed; Klim is the power; Souh is the pivot; it is purpose is for worship of the Divine Mother. This worship of the Divine Mother (of Kameshwari ) which is the ocean's embrace with the Sun, gives the devotee a Sword, a power supreme, that Heavens of the remotest galaxies. When the devotee thinks of such a sword, he or her become the protector and enjoyer of eighteen lands of jewels ( Sakti peetams ), and five continents.

She is wearing a sari made of golden threads; She is fair as nectarine milk and the moonlight; She has three eyes; in Her four hands she is wearing a book of knowledge, a noose, a goad, and a garland of letters; She is a personification of all that is beautiful, aesthetic, harmonius, joyful, vibrant; she moves in Sri Chakra, a mandala consisting of all the deities worshipping their consorts named here after.

om (in the name of God), may you grant us benediction of knowledge, power and grace; and the power over creation, nourishment and destruction.

Om, we bow to you, the most beautiful in all the waking, dreaming, or sleeping worlds.

( Keep offering kumkum at Her feet with every name below )

( Follow the names of the saints who have worshipped the Deviine Mother and attained liberation thereby;)
Lopamudramayi, - Lopamudra - She offered herself for worship
Agastyamayi, - Agastya - he drank the water of the oceans, drying them up
Kalatapanamayi, - Kalatana - he set time on fire
Dharmacharyamayi,- Dharmacharya - he preached the nature of good and evil
Muktakesisvaramayi, - Muktakaleisvara - not worrying about his appearace he let the hair flow loose
Dipakalanathamayi,- Depakalanada - he gazed on eternal light
Visnudevamayi, - Vishnudeva - he expanded himself, took up the whole of space
Prabhakara devamayi, - Prabhaharadeva - he became a star called the sun
Tejodevamayi,- Tejodeva - he became the light witch was speeding over all space creating space itself
Manojadevamayi,- Manojadeva - he was desire
Kalyanadevamayi,- Kalyanadeva - he was ever auspicious
Vasudevamayi, - Vasudeva - the world grew out of his memory
Ratnadevamayi, - Ratnadeva - concentrated like jewels
Sri Ramanandamayi - Sri Ramananda - he enjoyed the Goddess Sri Rama Blissfully

( The passions called : lust, anger, possessiveness, obsession, pride, jealousy, good, and evil. The procedure to control these passions and obtain the powers of: agiting all, liquifying all(orgasmically), attracting all controlling all, maddening all, directing all, moving in all space, be the information of all, be the source of all ( womb), be tri-fold division of all ( the knower, the knowing, and the know)
Trilokya mohana cakra swamini Prakata yogini

The wheel of the three worlds of waking, dreaming, and sleeping, expressing Herself openly without inhibitions.

The wheel which fulfills all directions and all desires, the secret yogini - female yogini
Third & fourth enclossures


seventh enclossure
( Following the eight forms os Sarasvati, knowledge, which are originally the group of letters describing the explosion of the cosmos from a point: - the seventh enclosuer: )

Weapons of divine mother
( Follow the weapons of the Divine Mother: )

( Follow the Goddesses of the eighth enclosure of the Sri Chakra: )
Maha Kamesvari, - The thrust of God expressing the desire to see Himself in many forms
Maha Vajresvari, - The ability to obtain the cosmos in seed form
Maha Bhagamalini, The ability to express the cosmos out of the seed
Sarva Siddhiprada Cakra Swamini
Athi Rahasya yogini