Last week, Tucson, Arizona’s Bike Shop Hub posted the following photo of a “bike lane” built so badly it would be laughable if it weren’t so depressing. The raised bike lane, which appears to be on the shoulder of an overpass, angles in to join up with the sidewalk…right through a metal barrier. It’s the bike lane equivalent of building a highway that casually veers into a brick wall. While it’s hilarious in the same way this is hilarious, the photo just highlights the second-class citizen approach many city planners still take to bicyclists. Money is poured into road projects for cars, and if a little bit is set aside for bike projects, so little care goes into their planning and execution that we end up with infrastructure so bad it’s barely usable.

In response to the ridiculous photo, a number of other Twitter users began posting their own photos of laughably terrible bike infrastructure. Twitter user Robin Mazumder posted the below photo of a “bike lane” in Halifax, NS which appears to start and end within 8 feet in a drainage gully. Great if you need a safe place to track stand while dumping out a slurpee. Not great for anything else.

Twitter user Felix posted this photo of a 2-way bike lane in Seoul, South Korea, which offers you two safe ways to ride straight into a traffic light pole.

Another posted by Twitter user CM_Hildesheim in the town of Hildesheim, Germany offer riders the opportunity to experiment with bicycle hurdles. Just make sure to hit the brakes when you clear the hurdle, the lane doesn’t continue on the other side.

If you dig even a little bit deeper into the world of terrible bike lanes on social media, you can find some impressively unimpressive stuff. Take this bike lane posted by Twitter user Marlo Stimpson back in March, which seriously has to be a joke.

Or this gem posted by the CBC’s David Common under the hashtag #BadBikeLanes, which appears to be operating under the assumption that all bicyclists are tree huggers or really have to pee?

This beauty, which Twitter user Justin S posted back in 2014, is great for bicyclists who just don’t really favor long distance rides.

From Flickr user Simon, this marvel of modern engineering in London, England gives riders the ability to easily participate in multi-modal transportation. Simply ride full tilt into the sidewalk, fly over the handlebars to clear the fence, and boom, you’re a pedestrian!

Spotted in Nottingham, UK. I guess this is more of a mountain bike lane? You just have to start with a 20 ft drop out of the tree.

And finally, this thing. Which, well, I don’t even know what to say.

Does your town have a crappy bike lane? Tweet us your photos at @momentummag or tag us on Instagram @momentummag and we’ll retweet them. Use the hashtag #BadBikeLanes, let’s get this rolling and let our city planners know that biking is a real form of transportation, and we deserve infrastructure we can actually use. 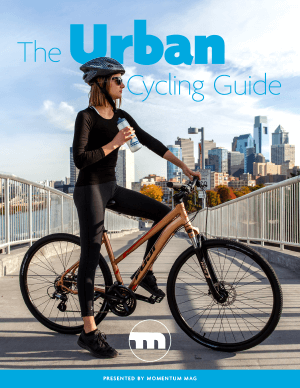 Get your FREE copy of our new guide: Momentum Mag's Urban Cycling Guide

In our latest free guide, we share a few tips and tricks for anyone new to urban cycling who is looking to get started. We discuss the latests numbers regarding safety and cycling as well as go over a few rules of the road that every cyclist should know.

Please select your country and provide a valid email address

This is a sponsored guide. Your email address may be shared with Fuji. Please read our Privacy Policy.

Thank you for your submission. Your free guide has been sent to the email address you provided.