Out of all the animals, why do only horses need to wear shoes? Creating horseshoes has traditionally been a significant part of blacksmithing, so I thought it was relevant to discuss this topic. After all, the logo of my website prominently features a horseshoe!

Why do horses need to wear horseshoes? Domestic horses live in very different environments on cold, wet farms than the arid steppes they’re used to in the wild. This can cause uneven wearing and cracking. Domestic horses also traditionally carry weight such as riders, plows, wagons, and packs that put additional strain on their hooves. In addition to preventative care, horseshoes can be used to treat muscle or bone problems in injured horses.

In this article, I’ll explain what a horseshoe is, why horses wear them, the history behind them, how a farrier shoes a horse, and much more.

What Is A Horseshoe?

A horseshoe is an object that’s usually made of metal, although it can also be made of other synthetic materials. Its purpose is to protect a horse’s hoof from damage and wear.

Horse shoes are attached to the bottom of a horse’s hooves using nails. These nails go through the hoof wall, which is similar to toenails on humans. This doesn’t hurt the horse since there’s no feeling or nerves in the area. Some farriers glue on their horseshoes instead of nailing them though. 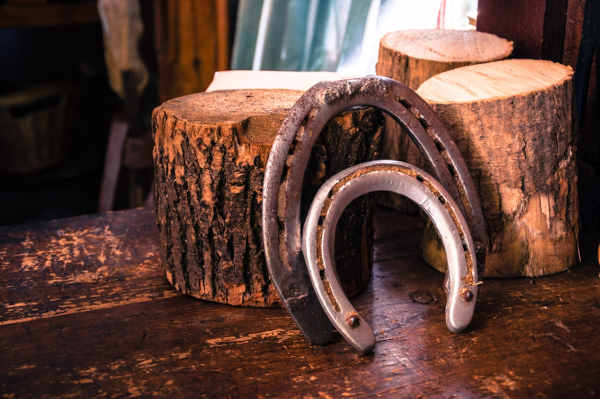 Why Do Horses Need To Wear Shoes?

There are many reasons why domesticated horses may need to wear shoes.

In the wild, horses travel many miles each day to get food. But although they can cover as much as 50 miles per day, they typically do it at pretty low speeds. The only time a horse needs to run at higher speeds in the wild is for short durations while it’s outrunning a predator.

Since domesticated horses aren’t traveling 50 miles or more per day, their hooves get overgrown or wear unevenly unless they’re trimmed regularly.

Horses naturally live in quite dry and arid climates, bordering on deserts. Traveling in a dry climate at a slow rate means a horse’s hooves naturally get worn evenly and hardened. The constant wearing makes a horse’s hoof hard and thick.

In domesticated horses, the environment they live in is much different. They usually live where it’s wetter and colder than where they naturally live. Walking on heavier and softer soil makes a horse’s hoof weaker over time.

Traditionally, domesticated horses also pull or carry extra weight. They were commonly used to pull plows, wagons, pack loads, and obviously ridden as a form of transportation. Adding extra weight for a horse to carry, combined with doing it on softer ground like irrigated farm land, makes a domesticated horse’s hooves prone to wear and crack.

Horses are kept in stalls when not in use. Usually they are standing on wet hay, and their hooves are also exposed to ammonia from their urine. Ammonia only further weakens a horse’s hooves, which are made of keratin, the same thing human fingernails are made of.

To Correct Musculature Or Bone Problems

If a horse has problems with its legs, a farrier can create custom shoes to help. Varying a shoe’s shape, thickness, and weight can help adjust and correct a horse’s gait (the way they walk.)

Racehorses have specialized shoes to help with any weakness in their legs or feet.

Horseshoes can provide added traction for horses who work in slippery conditions.

To Change How A Horse Steps

Some breeds of horse are judged in competitions based on how they walk. A high step is desirable, and specially shoeing a horse can accentuate their natural gait.

What Is A Farrier? 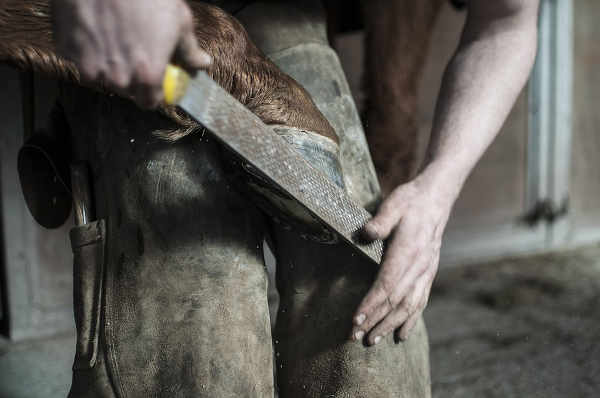 A farrier is a professional who fits horseshoes onto horses. They’re almost like a cross between a veterinarian and a blacksmith.

Farriers create custom horseshoes to fit specific horses and attach them to the horse’s hooves. They file the hoof to get it prepared for shoeing. Farriers can also assess lameness and other issues that might be affecting a horse’s ability to walk.

In some places like America, you don’t need any kind of license or certification to be a farrier. In other places like the UK, horseshoes can only be fitted by qualified and experienced professionals.

What Are Horsehoes Made Of?

Most commonly, horseshoes are made of steel.

Steel is a strong metal that’s hard to wear out. Horses wear steel shoes for all kinds of activities like regular riding, show jumping, polo, and eventing.

Racehorses typically wear aluminum shoes due to their lighter weight.

Other materials that horseshoes come in include titanium, copper, magnesium, plastic, and rubber.

Some horseshoes have caulks or studs, which provide extra traction.

Horseshoes have long been used as talismans, a sort of good luck charm.

Some people believe that hanging them above your doorway will bring good luck to your household.

There’s some dispute about the correct way to hang a horseshoe to maximize luck. But it’s more common to hang it with the ends pointing up to form a “U” shape. People believe hanging a horseshoe this way makes it like a good luck container that captures any luck floating around.

Horseshoes are usually hung up using seven nails, since seven is considered to be the luckiest of all numbers. Horseshoes are made of iron, which is believed to ward off evil spirits, giving them an additional use.

Some sailors nail a horseshoe to the mast of their ship, believing it will help them to avoid storms.

The History of Horseshoes 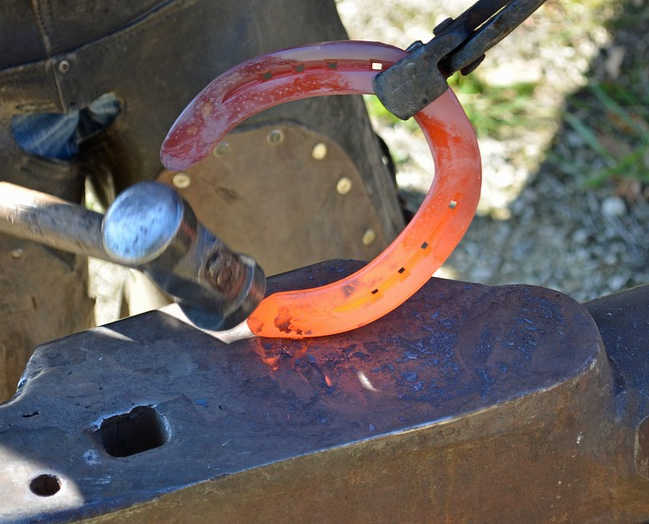 The first horseshoes were made in Asia in ancient times. Horse hooves were wrapped in leather or rawhide to prevent excessive wear.

Later on, the British and Romans made an early predecessor to the modern horseshoe called a hipposandal. This metal or leather object was strapped to the bottom of a horse’s hoof, like a big sandal.

It’s hard to say when iron horseshoes began to be used. Since iron was still a valuable resource at the time, any worn out horseshoes would have been melted down and reused to make something else. But it’s believed that crescent-shaped horseshoes nailed on like we know today weren’t largely in use until around the year 500 AD.

In Europe, horseshoes made of cast bronze became common around the year 1000 AD.

In fact, the need and creation of horseshoes largely contributed to the science of metallurgy. Making horseshoes was also a staple for blacksmiths at the time and comprised a lot of the work they did.

Since they were made of iron and had value, you could even pay your taxes with horseshoes if you didn’t have coins!

In 1835, an American man named Henry Burden invented a machine that could make up to 60 horseshoes every hour.

What Is A Hoof Boot?

A hoof boot is usually used as a temporary substitute instead of putting horseshoes on a horse’s hoof.

They’re actual boots that cover a horse’s hoof and can be put on and removed. For people who prefer their horse to be barefoot most of the time, it’s a good short-term protection during riding and other activities.

The downside is that they can be a pain to put on, and also to clean afterward. A horseshoe just goes on and stays on.

How Does A Farrier Shoe A Horse?

First, the farrier needs to remove any existing old shoe from the horse. This is done with a special pair of pincers called shoe pullers.

Then he needs to trim the insensitive hoof wall, which doesn’t cause any pain to the animal. This is similar to humans getting their fingers manicured. This is done with a tool called nippers, which are like a sharp pair of pliers. If the hoof isn’t trimmed properly, it can cause bones in the horses foot to become misaligned which can cause problems later on.

The farrier then measures the horse’s foot and bends a horseshoe into the right shape using an anvil and hammer.

Some farriers cold shoe, which is bending the metal without heating it up first.

Other farriers hot shoe, which is a type of blacksmithing. They put the horseshoe into a forge to heat it up before bending it. Hot shoeing makes for a better fit, but it’s also more time consuming and requires more specialized equipment.

A hot shoe can be held against the horse’s hoof to measure, but it can’t be left too long or it will cause damage. Before the finished shoe is fitted, it needs to be put in water to cool it off.

Then the farrier can nail the shoe into the horse’s hoof. The nails are hammered in such a way that they angle outwards. This prevents going deep into the sensitive part of the horse’s foot. If the nails protrude out of the horse’s hoof after being nailed in, they can be easily cut off with a sharp pair of tongs called a clincher.

Finally, the farrier uses a large file called a rasp to smooth out any sharp edges.

There’s a big divide among horse enthusiasts about horseshoeing.

While some people think horseshoeing is necessary, others don’t think horses should ever wear shoes. They argue that proper trimming can prevent and correct any hoof problems that horseshoes are traditionally used for.

There are options besides traditional horseshoes if your horse is suffering from sore feet. You can put hoof boots on your horse for temporary protection only while riding. Or you can glue on horseshoes instead of nailing them, which some horse owners feel is more humane.

Those who are against shoeing horses feel they can often do more harm than good. A horse with a damaged or brittle hoof can get damaged even more during the shoeing process. Improperly fitted shoes can cause more damage than no shoes at all, just like a human trying to wear shoes that are too big or too small.

Ultimately whether you shoe your horse or not is a personal choice.

Q: Do horseshoes hurt horses?
A: Generally horseshoes don’t hurt horses if they’re attached correctly. That’s because the thick outer part of a horse hoof is similar to a human fingernail and doesn’t feel pain. However mistakes can happen while shoeing even when it’s done by an experienced farrier. A horse may move when a horseshoe is being attached, causing the nail to get too close to the sensitive inner part of the hoof.

Getting too far into a horse’s hoof can cause them to feel pain in bleed, similar to hitting the quick while cutting a dog or cat’s nails. In horses it’s even worse, and they might show signs of pain while walking for several days.

Q: What is the sport of horseshoes?
A: Horseshoes is a game that can be played using actual horseshoes, although in modern times special sport horseshoes are usually used. The object of the game is to throw them as close as possible to a stick or rod to get points. This game is ancient, probably as old as horseshoes themselves.

Q: How often do horseshoes need to be replaced?
A: A horse grows a completely new hoof in just one year. So they might outgrow their shoes faster than you think! It depends on the horse and the amount of wear on their shoes, so it’s important to frequently check to make sure they’re properly fitted and the right size.