Why I hate Mr Bean!

By David Thomas for MailOnline
Updated:

When Iranian interrogators wanted to humiliate and torture captured Royal Navy seaman Arthur Batchelor, they kept him in the dark and called him Mr Bean.

When my nine-year-old son wanted to ­infuriate and torture me, he made me take him to the local multiplex, where I sat in the dark and watched Mr Bean Goes On Holiday.

This week, it appeared that this grotesque, ­rubber-lipped character could make a ­comeback after Mr Bean’s creator, Richard Curtis, said he was tempted to ‘return to Mr Bean’.

Although Rowan Atkinson swears he will never make another Bean film, can he really hold out if the pay cheque is large enough?

I contend that Mr Bean is an irritation and a menace, off the screen as well as on. Above all, he’s the comic confirmation of every ­negative stereotype that foreigners have about the ­British.

Hopeless, sexless, awkward, badly dressed, acutely self-conscious and ill-at-ease, ­blitheringly useless at everything and ­completely oblivious to anyone and everything around him, Bean is a very clever man’s very stupid invention.

And he is unmistakably British, right down to the Mini (the old kind, naturally, not the slick new BMW version) in which he travels from one ­disaster to another.

Other Britons are often infuriated by this ­grotesque caricature. ‘If Rowan Atkinson hasn’t got the heart to kill off Mr Bean, I’ll gladly ­throttle him by his ­necktie myself,’ fumed one Fleet Street film critic forced to watch his last outing, Mr Bean Goes On Holiday. Yet Mr Bean is one of the most successful ­pop-culture exports this country has ever ­produced.

He made his debut in a half-hour ITV special on New Year’s Day 1990, since when more than 200 countries have bought the 14 original Mr Bean TV shows. A Bean cartoon series has also been sold around the world.

The two Bean films grossed a staggering £300m at the global box office, and at least as much again in video and DVD sales. Mr Bean Goes On Holiday was the No 1 film in 21 countries.

Bean has become a genuinely iconic figure. When Austrian psychology ­professor Dr ­Willibald Ruch wanted to test the effect of laughter on people’s ability to tolerate pain, he made his ­volunteers watch Mr Bean. (To make them laugh, that is, not as part of their torture). 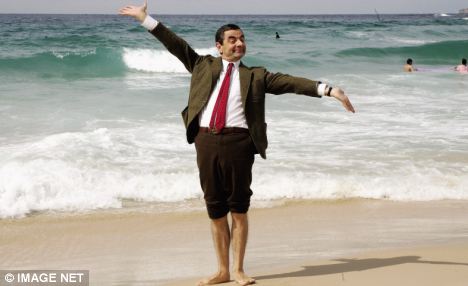 Hit: Mr Bean Goes On Holiday was the No¿1 film in 21 countries

In Ruch’s view, Bean’s essentially silent comedy is universal: no matter what their native tongue, anyone can get the slapstick humour. But the ­professor accepts that Bean’s ­nationality is unmistakable.

‘If you did an experiment with a one-minute clip from Mr Bean and you showed it to people, omitting where it was from, there would be an above-­average chance people would guess he is British — it’s the way he looks and also his demeanour, the way he behaves.’

Of course, the British tradition of self-mockery arose originally from a position of strength. When P.G. ­Wodehouse created that incomparable buffoon Bertie Wooster, the ­British Empire was still in its pomp.

But today, when our nation is a declining power and the politically-correct Left controls so much of our culture, we no longer laugh from a position of strength, but from one of cringing, grovelling self-hatred.

We live in the only country in the world that considers its own flag a potentially offensive racist symbol. Our rulers demand we respect every culture except our own.

The default joke of every satirical TV or radio show is that anything British is rubbish.
So not only do our competitors and enemies start to believe this. We do, too.

Why I hate Mr Bean!